In my last installment, I talked about how I set up a UHF antenna at my cabin to pick up the Los Angeles area TV stations rebroadcast from the Victor Valley Translator in the high desert.

My cabin is only about 25 miles (as the crow flies) from the Los Angeles area broadcast antennas on the top of Mount Wilson. The bad news is that there are several peaks between there and my cabin. But according to the TV Fool report, Ihad a chance of getting the VHF stations (7, 9.11, and 13), while I would have little chance of picking up the UHF stations. That makes sense because VHF signals can propagate down hillsides, unlike higher frequency UHF signals. Also, trees do a good job of blocking UHF signals, but that’s not much of an issue for VHF signals.

Here’s a detailed map for one of the VHF stations broadcasting from Mount Wilson (top center on the map). My cabin in Wrightwood is indicated by the red pointer in the top right center. 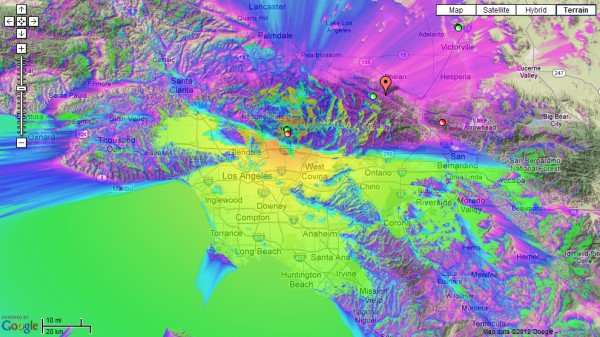 Here’s a closeup of the Wrightwood area. All purple, indicating fringe reception area. But better than nothing. 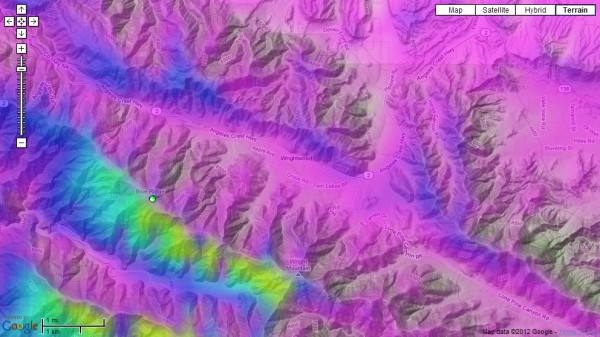 Here’s the elevation view, with Mount Wilson on the far left, and my cabin on the far right. The TV Fool modeling accounts for propagation of the VHF signals down the hillside.

I needed another antenna on the roof pointed toward Mount Wilson in order to pick up those four VHF stations. It came down to a choice between two high gain directional VHF antennas: the Antennacraft Y10713 and the Winegard YA-1713. Both were available for around $40 at Solid Signal. I got the latter, it was a little shorter at 100″ versus 120″.

To my surprise, while I was just putzing around with putting the antenna together on the back deck, I got a digital “lock” on Channel 7. That was a promising sign that I would have good luck on the roof. 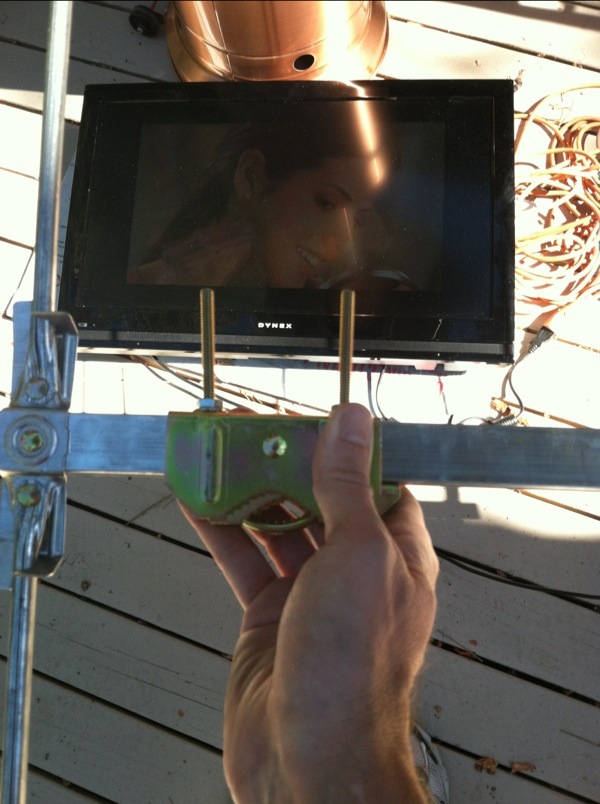 Just like for the UHF antenna, there was only one good spot on the roof for the VHF antenna. The choice of location wasn’t intuitive, it is pointing right at a tree! Of course, the one good spot had to be a different than for the UHF antenna, about 8 feet away. So I made an “emergency” run to Radio Shack for another mounting tripod – they actually had one in stock! I had enough remaining 1-1/2″ conduit for an antenna mast, higher worked out better for the VHF antenna. 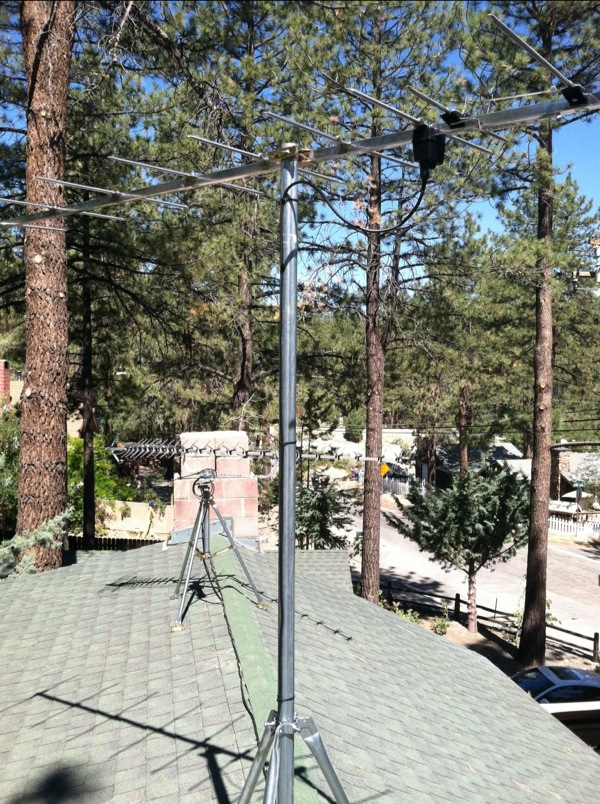 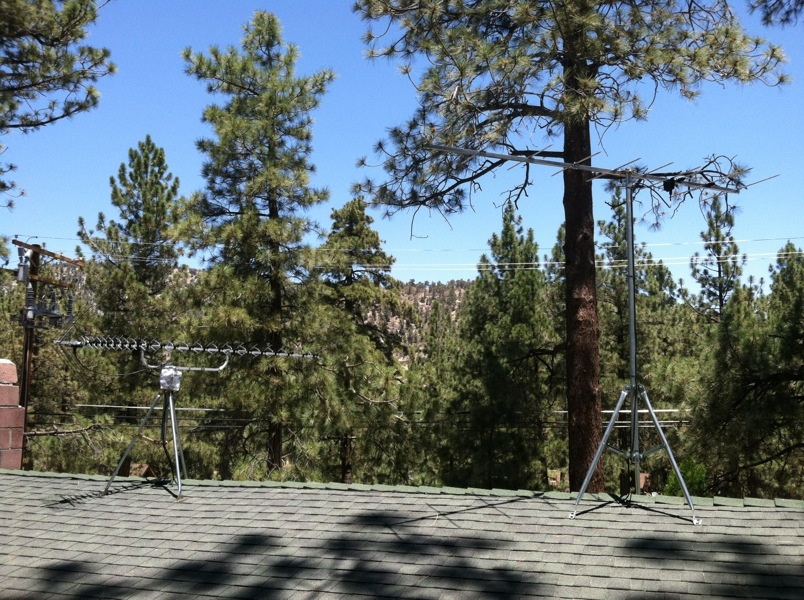 I originally had the UHF antenna higher, but unlike the situation with the VHF antenna, I wasn’t getting any extra benefit for the height. So I lowered it as far down as it could go, with no loss in signal quality. I feel better about it that way, less to flap around in the wind. Notice the hills in the background in the photo, they block the UHF signals for most people in town, but I live far enough east that my antenna can point “around” them. 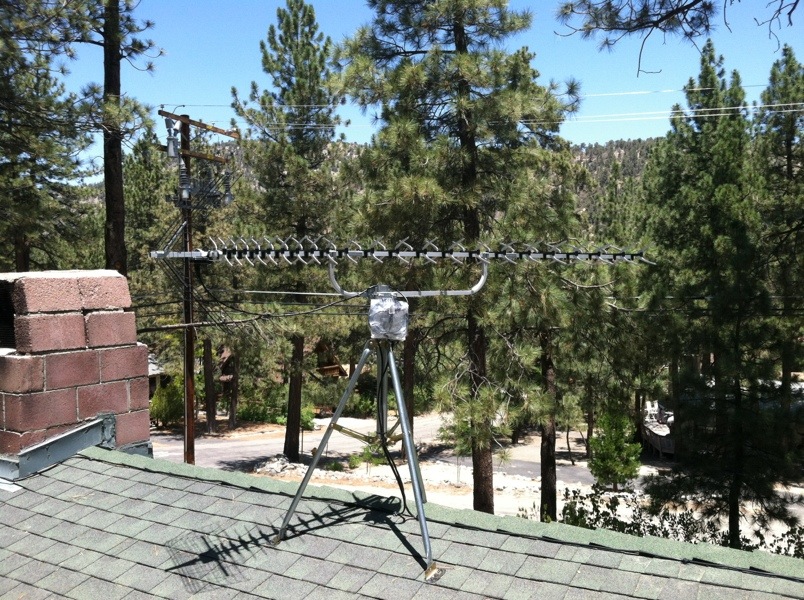 So here’s a recap:

Antenna #1 is UHF only and is pointed towards the Victorville translator. Digital channels 47 (KCET) and 64 (KHIZ – Barstow) are a “lock” and are crystal clear. (The signal quality shows as “good” according to the TV signal strength meter.) The remaining channels are analog, strong enough to have color and sound, but varying degrees of snow. Those include 21 (CBS), 25 (NBC), 27 (Fox), and 51 (MyTV).

Antenna #2 is VHF only and is pointed towards Mount Wilson. Digital channels 7 (ABC), 11 (Fox), and 13 (MyTv) are a “lock” and are crystal clear. (The signal quality shows as “poor” to “normal” on the TV signal strength meter, I’m certainly on the edge here.) Channel 9 (KCAL) is in that direction also, but it has a weaker signal than the others, and I can’t pick it up. 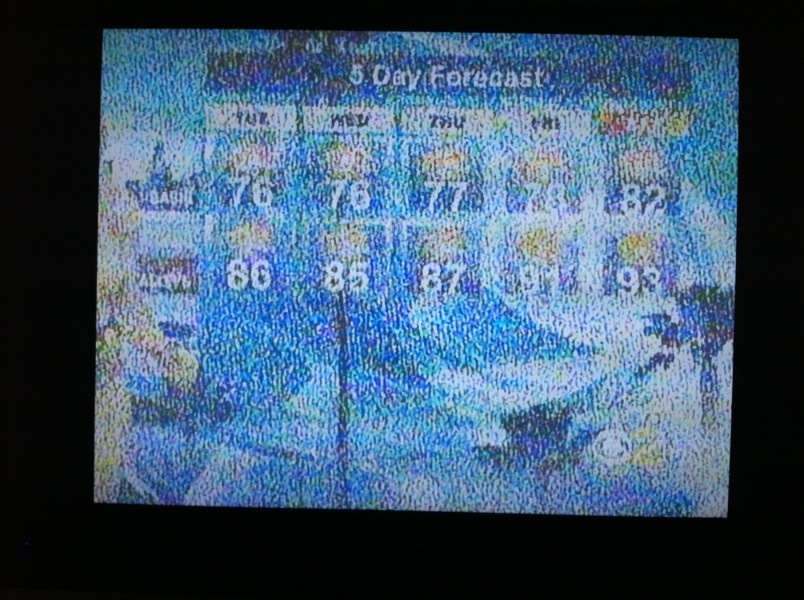 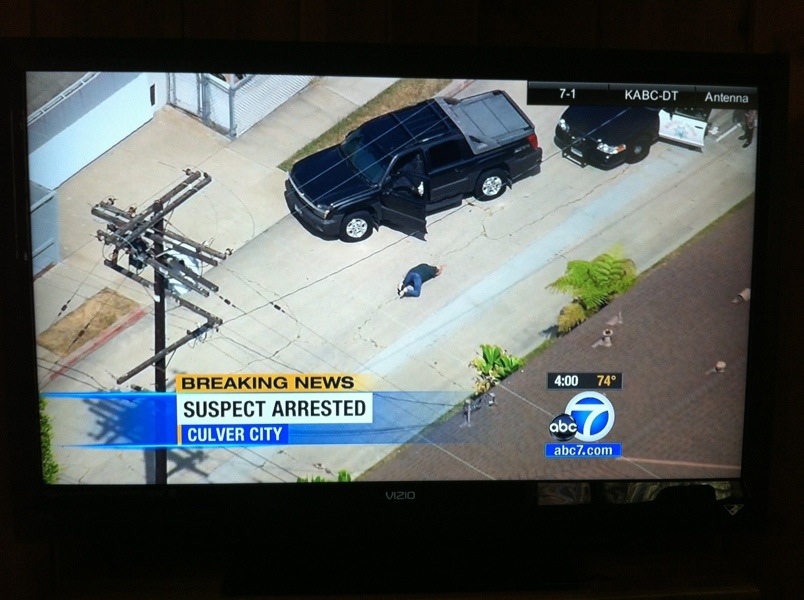 Most people in Wrightwood don’t have line of sight to the translator, and if they do, trees are an issue blocking the UHF signal. Better luck would be had with an antenna pointed towards Mount Wilson, but it’s still a crap shoot, and even then, is it worth the effort for three stations? For most people, I suspect not. (All the other stations from Mount Wilson are UHF, and those signals don’t make it to Wrightwood.) In my case, I’m lucky enough that I can get all the major networks with a combination of the two.

And last, but not least, many thanks to the folks who contributed to this TV Fool forum thread and offered helpful hints. 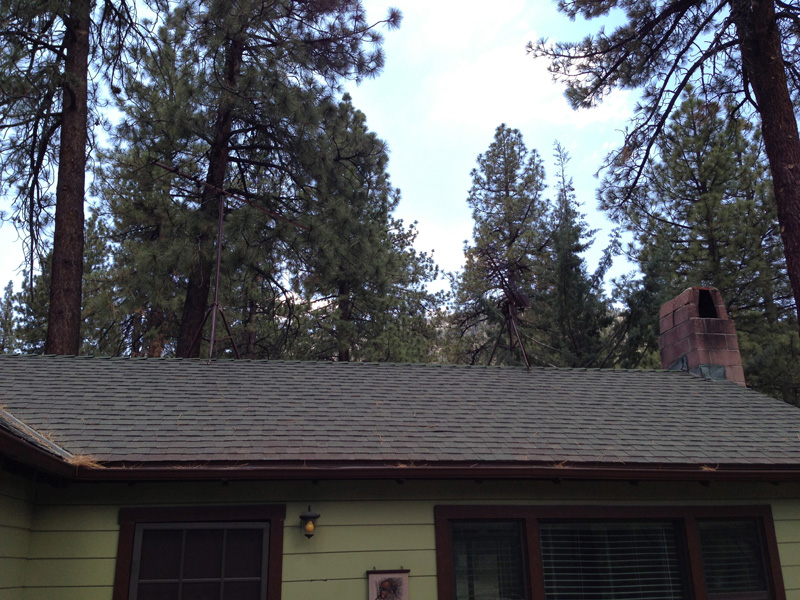